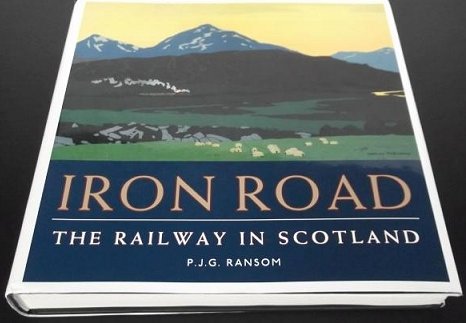 "Iron Road" is a comprehensive and authoritative history of the Scottish railways told in a single volume. A pleasure for any railway enthusiast, this book also reaches out to new audiences, exploring technical details as well as social and cultural aspects of the industry, drawing together a vast amount of carefully researched material into a single accessible work.

The story begins in the 18th century when horses pulled coal waggons along rails of wood. In the Victorian era, a national railway network was built, and during the golden age of Edwardian times steam trains carried everything and everybody everywhere, from commuters and industrial materials to tourists holidaying in the Scottish countryside.

The railway's dominance as a transport network was first challenged by the Depression of the '30s, but its overwhelming competition appeared with the prosperity of the 1960s, when Britain's financially mobile masses began to purchase and rely on motor vehicles for pleasure and business. Much of the railway network disappeared, steam was replaced by diesel and then by electric traction, and it seemed Scotland's proud rail system was in rapid decline. Yet forty years on, passenger numbers and railway mileage are on the increase again, and heritage railways and museums are working hard to preserve Scotland's railway identity.

At the present time, when powers over Scottish railways have largely been transferred from Whitehall to Holyrood, this book is essential reading for all who care about the future of Scotland's railways, as well as their past.